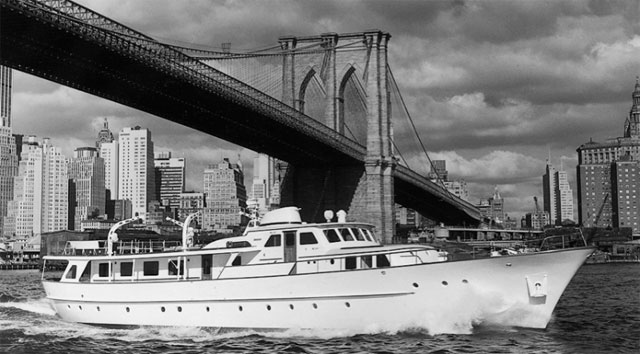 Do you own a classic Feadship? Then the Feadship Heritage Fleet wants you to join a special event being held in Fort Lauderdale on November 1.

It makes sense, since more than 50 percent of Feadships over the years have been commissioned by Americans. Capri, pictured above, was one of the first. She debuted at the New York Boat Show in 1953. Some of those Americans were quite high-profile, like the late Malcolm Forbes, who owned The Highlander. The classic Blackhawk belonged to the Wirtz family of Chicago—the same name of the famed hockey team they owned.

Besides meeting with like-minded owners, Feadship Heritage Fleet members receive benefits. There are exclusive services and products, including insurance and financing. These also include events like the one being held November 1. The first Feadship Heritage Fleet event occurred during Monaco Classic Week in September 2013, for example. The Monaco Grand Prix this past May marked the second, with five members’ yachts lining the racetrack. In June, 18 vintage Feadships rendezvoused in The Netherlands. The latter marked the most Feadships ever together simultaneously.

Читайте также:  Rybovich, Others to Benefit From ICW Dredging

If you need further convincing to join the Feadship Heritage Fleet, listen to Kristin and Chapman Ducote. They’re the owners of Anahita V, a 1952 Feadship, and the only stateside-based members so far. They call it a “genuine family-type club.” Their first fleet event was the Monaco Grand Prix back in May, where they enjoyed meeting fellow owners and seeing their yachts.