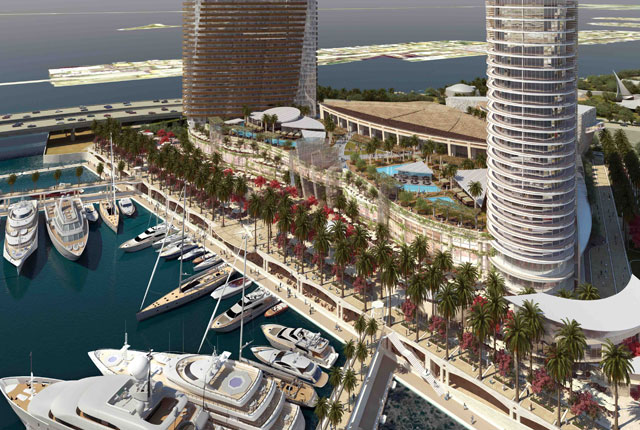 The longstanding Yacht & Brokerage Show megayacht displays along Collins Avenue in Miami Beach are being supplemented. Next year the show will add floating docks at Island Gardens, a marina planned for nearby Watson Island.

Island Gardens will host what the Yacht & Brokerage Show’s management team calls Superyacht Miami. Megayachts measuring 150 feet (about 46 meters) and larger will be included. Joining them will be land-based exhibition space for tenders, personal subs, and additional related companies.

While the Collins Avenue section of Miami Beach can host a large number of yachts, it has drawbacks. For one, the width of the Indian Creek Waterway posts a challenge for most megayachts exceeding 160 feet (49 meters). The depth is an additional challenge, barring any sailing superyachts from being exhibited. Then there’s the lack of land space for tents to house even more exhibitors. That’s why for the just-concluded Yacht & Brokerage Show, the organizers added Superyacht Miami at the Miami Beach Marina. That marina can accommodate both power and sailing superyachts to 250 feet (76.2 meters). Eight megayachts were on display at the inaugural Superyacht Miami.

Skip Zimbalist, CEO of Show Management, which co-owns the Yacht & Brokerage Show with the Florida Yacht Brokers Association, pledged to continue to support the Miami Beach Marina in announcing the deal with Island Gardens on Watson Island. However, it’s clear that Watson Island is the focus for the future of Superyacht Miami. “Island Gardens is a world-class development,” Zimbalist says. “When it’s completed as planned, it will have one of the only marinas in North America designed specifically for superyachts.”

“Completed” is the key word. Island Gardens on Watson Island does not yet exist. It’s due to a decade-long battle. The 86-acre Watson Island is owned by the city of Miami, deeded by the state of Florida. Therefore voter approval for alterations was required. That occurred in 2001. Miami city commissioners granted a 75-year lease and a construction permit to Flagstone Property Group to develop it. In 2006, after finishing the planning and getting permits, Flagstone revealed that Watson Island would feature residences, a hotel, shops, and 50 slips for megayachts exceeding 450 feet LOA. Design changes and lawsuits ensued. Finally, in late 2011, new approvals were granted. The current plans call for two hotels, fractional ownership residences, shops, restaurants, and of course the marina. Flagstone has been concentrating on financing for the past few years. It expects that groundbreaking will take place on Watson Island early next year.

Because the Island Gardens marina won’t be completed, Zimbalist says that Superyacht Miami next year, concurrent with the Yacht & Brokerage Show, will feature some floating docks. It’s too early to determine how many megayachts will be displayed. Both Zimbalist and the Watson Island developer expect that the marina will be finished in 2016. At that point, Island Gardens will be able to handle 35 to 75 megayachts, depending on how many and what LOAs need dockage, from 80 to 450 feet (24 to 137 meters).

Watson Island is accessible via the MacArthur Causeway. It will additionally be home to water taxis, connecting it to sections along Biscayne Bay, South Beach, and Fisher Island, among others. Attendees of Superyacht Miami will receive complimentary transport from Collins Avenue.

We’re following construction progress on Watson Island and will provide updates as they occur.